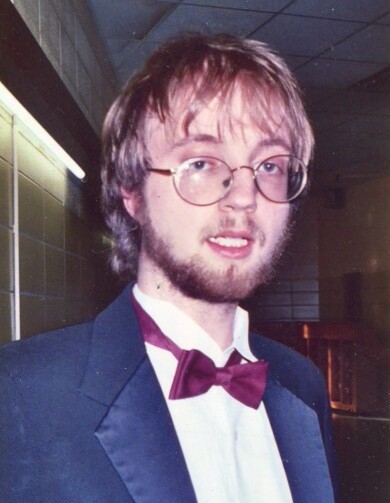 Patrick Andrew Logsdon passed away on May 7, 2020 in Louisville Kentucky.  He was born in Louisville Kentucky on August 16, 1984, the son of Patrick and Barbara Logsdon.  Andy was a kind, loving gentleman who loved everyone he met.  Andy had a love for animals that started with the first family dog and continued to our current 3 dogs Beau, Bella and Bitty Boy.  He learned everything he could about plumbing, in hopes of fulfilling his lifelong dream of becoming a licensed plumber and to follow in his Grandpa Snawder footsteps.   As a young boy Andy enjoyed swimming, camping, and boat rides at his family camp on Rough River.  He learned to start campfires at a young age and kept the tradition going in our backyard fire pit.  Andy loved all music, especially Johnny Cash and the Beatles, he played the trumpet in the middle and high school band and taught himself how to play guitar.   He loved TV and movies, Columbo, Ghostbusters, and Chuckie were his favorites.  He could do a great impression of Mr. Hainey on Green Acres.  Andy lived a full life, loved UK and even watched them play in a championship bowl several times, enjoyed cooking and trying new recipes and always made sure his mom was well taking care of.  He leaves to cherish his memory, his parents Patrick and Barbara, brother, Nicholas Logsdon and many aunts, uncles and cousins.   Andy was preceded in death by his brother Alex, grandparents, MaryBea and Newman Logsdon, Mary Elizabeth and Herman Snawder and this uncles, Doug, Ben and John Logsdon. A private service is planned.

To order memorial trees or send flowers to the family in memory of Patrick "Andy" Logsdon, please visit our flower store.