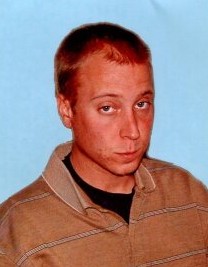 Nicholas "Nick" Patrick Logsdon passed away on September 4, 2021 at Norton Audubon Hospital in Louisville.  He was born on November 13, 1981 in Louisville, the son of Patrick M. and Barbara J. Logsdon.

Nick showed a great ability for sports at an early age, he played T Ball at age 4 and continued to the 16-year-old, senior group, at the Germantown Ball Park organization. He tried out when he was 9 years old to play basketball for St. Therese school, and was chosen to be on the Varsity squad of 12–14-year-olds. Nick went to St. Xavier HS for his freshman year and played on their baseball team.

Nick transferred to Atherton High School for his sophomore year until graduation and played on the baseball, basketball and football teams.  He was enrolled in all college level classes, in all his school subjects, in high school.  Nick loved to go to our family's camp at Rough River Lake, where he enjoyed swimming, boat rides, jet skis, innertubes behind the boat, fishing and large bonfires at night.  He loved to hike in the woods and would be gone for hours on these hiking adventures.  Nick would often bring his friends from school to the lake to enjoy some time with his family and away from the city.

After graduation, Nick went to work at Walnut Ridge Nursery & Garden Center in Indiana. He developed a great love for plants, and with his knowledge, he became well known by the customers and would help them pick the perfect plants for their yards.

Nick was a very generous, kindhearted man who would do anything for you when asked. He helped his parents at home, he would cut the grass, work on the plants in the yard, clean the house, and help feed and walk all the dogs of the house.

He would rarely have to be asked to do a chore or task.  Nick loved all animals that started with the family dogs, fish tanks, red ear slider turtles and hamsters.  When he got his apartment, someone gave him a male Siamese cat that he named Mr. Kitty who lived with Nick for over 11 years before he passed. 1 week before he went into the hospital on August 8, he adopted a 6-month-old female kitten that he named "Peggy", after the character Peggy Bundy on the TV show "Married with Children."

Nick will be sorely missed by his family, mother and father, aunts and uncles, cousins and the friends he made throughout his life, here in Louisville. He never met a stranger and loved being around people.

To order memorial trees or send flowers to the family in memory of Nicholas Logsdon, please visit our flower store.